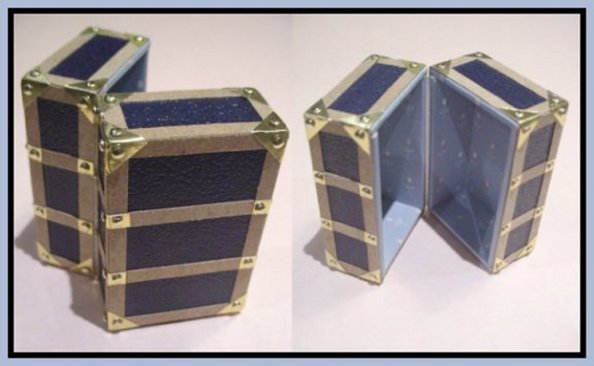 Enlarge picture showing sizes to cut the mat board

2. Take up your piece of patterned wallpaper and flip it over to the back side.

Enlarge picture showing where to start with the wallpaper

3. Using your glue stick, paste your 10 pieces of mount board onto the wrong side of your patterned wallpaper. Leave at least a 15mm (½"-¾") gap between pieces.

Label the pieces EXACTLY as I have, not just randomly, or you'll have a problem if you're using a patterned wallpaper that must keep the pattern in the same direction.

Enlarge picture showing how to mark the mount board

6. Using a craft knife on a cutting mat or a small pair of scissors, cut out your pieces as shown, leaving 1cm (1/3") of your wallpaper sticking out beyond the board as shown on 4 of the 5 pieces of your A-side.

Enlarge picture showing how to cut the pieces marked A

7. Then repeat for side marked B.

Enlarge picture showing how to cut the pieces marked B

When you glue down the wallpaper it will probably cover the "labels" which you marked onto your pieces earlie; just write them again as they certainly help when it comes to assembling the trunk.

9. Your ten pieces should now look something like this.

10. Pick up pieces A1 and A2. Using a glue syringe full of tacky glue, or a toothpick, run a line of glue along the top, narrow edge of piece A1 and push piece A2 up against it and hold. (Important: Do not put A2 onto A1 - it butts up against it).

Enlarge picture assembling A1 and A2 together
TIP

If you have printed your own wallpaper, don't use too much glue, otherwise the ink on the paper will run.

11. While that is drying, pick up pieces B1 and B2 and repeat the previous step. Glue B1 up against B2.

Enlarge picture assembling B1 and B2 together

12. Next, put a line of tacky glue along the rough, long side of A3 NOT the long edge that has wallpaper folded over it, the other long edge, and also along one short edge and glue it on top of A1 as shown in the image.

Enlarge picture showing where to glue the third piece

13. Now repeat the previous step and put a line of tacky glue along the rough, uncovered edge of B3 and glue it onto B1, so that it butts up to B2. Your two sides of the trunk should now look something as shown in the image.

Enlarge picture showing where to attach B3 to B1

Enlarge picture showing the assembling of A4 to A1

15. Next, glue B4 onto B1 so that it pushes up against B2. Your two sides should now look like this.

Enlarge picture showing the joining of A5 to A1

17. Finally glue B5 against B1, butting up against B3 and B4. Your two sides should look something like this.

Enlarge picture showing where to glue the two parts

18. Now place the two sides A and B so that their openings face each other and they are almost touching about 1mm (0.039") apart.

19. Take your strip of white cotton fabric, place it onto the length of the trunk and mark off where to cut it. Then use your glue stick to paste this cotton strip down, joining the two sides of the trunk together.

Enlarge picture showing where to join the two sides

20. Put your trunk aside for the cotton strip to stick properly and do the following: Take your brownish-coloured card, put it onto a cutting mat and then use a craft knife and metal ruler to cut about six 3mm (0.118") strips from this card.

21. From the same brown card, measure a 3mm (0.118") strip, but instead of cutting it, use a pin or embroidery needle to gently score against the ruler.

Enlarge picture showing where to score the brown card

Enlarge picture showing where to cut and score the brown card

23. Cut 3 more of these strips that are scored down the centre, so that you have 4 in total.

Now you will be working on just one side of the trunk only. This will complete that side. The other side is identical. You will need to repeat the process on the opposite side afterwards.

24. Take your "faux leather" paper or scrapbook card, turn it over to the wrong side and place your trunk down on it in one corner. Draw around the trunk with a pencil.

Enlarge picture showing where to draw the outline

25. Use your craft knife to cut inside of your pencil lines. Check your cut piece against the trunk for size. Now paste the cut piece onto the trunk using your glue stick. It must not hang over the edges, rather let it be 1mm (0.039") or so smaller.

Enlarge picture showing the glued piece onto the trunk

Don't worry about little gaps of mount board showing, these will be covered in later steps.

29. Next, use your scored strip to do the very same thing, but on the outer edges of side 'A'. Cut 2 pieces to cover your long outer edges of 'A'. Glue on with tacky glue.

30. The next two pieces need to be cut from the folded brown strips once again. You'll need to make little cut outs for a snug fit when gluing, as shown in the image.

31. After measuring, cut the strip. It should look as shown in the image.

Enlarge picture showing the glued strip on the trunk

33. Use the same folded/scored strips to finish off the remaining 4 very short edges left on the 'A' piece. Measure, cut and glue; reference the image for how it should appear at this stage.

Enlarge picture showing where to glue the short edge strips

34. Use your ruler and a pencil to divide your trunk into thirds across its length. (Lines are about 15mm (0.594") apart. I've used a white gel pen where you would draw your lines with the pencil.

35. Take another of your 3mm (0.118") brown card strips and use it to cut and paste pieces that cover wherever my white lines are on the navy blue.

Enlarge picture showing how to cover any remaining areas

36. Another view of how to glue the brown strips over the lines.

37. Now, using the gold metallic paper, preferably on a cutting mat marked in centimetres, score a piece of the gold paper into 1cm (0.39") blocks with a pin. Have at least 16 blocks.

Enlarge picture showing how to score the gold metallic paper

38. Then score lines diagonally through the blocks to form perfect crosses.

39. Carefully cut 4 of these gold blocks out.

40. Then cut these gold blocks diagonally across the centre so that you have 8 triangular "halves", as shown.

41. Fold the gold triangles carefully on the scored line, then using your tacky glue, paste 4 of these on the 4 corners of side A of your trunk closest to side B. (The other 4 gold triangles will be used on side B later, so put them aside).

Enlarge picture showing where to fold the triangle blocks

42. Take 8 more gold squares (4 of these will be used on side 'B' of the trunk later). Carefully cut a quarter section out of each square (see image for comparison). I find that a small sharp pair of scissors works best here.

Enlarge picture showing where to cut out the ¼ section

43. This next step requires the utmost patience. First pick up a gold square that has had a quarter section cut out. On the scored lines gently bend it, put tacky glue on and paste over the 4 outer corners of side 'A'.

Enlarge picture showing how to apply the corners

45. Then paste (glue) two of the gold blocks on the back, as shown.

46. Use more of the 3mm (0.118") gold strips to cut off pieces about 7-8mm (apprx ¼") in length, which are folded and glued onto the trunk to look like this. Reference the image for additional details.

47. Finally, glue gold studs or sequin centres onto your gold papered bits if required, to look like the trunk in the image.

48. Repeat from Step 20 through to Step 43 to finish off side 'B' of your trunk. Your trunk is now completed and should look like the image.

Enlarge picture showing completed trunk on one side

49. Your trunk is complete. Now you need to make something to put inside your trunk. 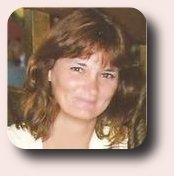 South Africa born artisan Debbie Dixon-Paver lives with her daughter on the east coast of the country. Professionally trained as a school teacher specializing in art, that experience now enables her to work full time as a miniature doll maker.

Professionally she sells dolls under the pseudonym Debbie Cooper Dolls. Specializing in 1:12 scale hand poured, china-painted, porcelain dolls from all different periods in history, from ancient to modern. She sells soley from her CDHM Gallery (click here).

Asked how she got into making such beautiful dolls, she will tell you that about 15 years ago, when her daughter was born, she put together a Victorian dollshouse kit for her nursery. When it came to finding "little people" to inhabit this house, it was as though she'd hit a brick wall.

The dolls which she really liked were way too expensive for her budget. So she ordered some "cheap and cheerful" dolls through mail order and when they arrived she was so disappointed with them. They were made from porcelain and china-painted, but were positively awful. When she was working as a teacher, she worked extensively with a kiln. This, combined with the disappointment of the dolls she had purchased, made her try her hand at making her own porcelain dolls. It was very difficult as she soon discovered that there were hardly any miniature dollmakers in her country to learn from. Working with porcelain was very different to firing or glazing earthenware and stoneware, which she was accustomed to working with. Now as they say, the rest is history.


Debbie is a valued member of the CDHM miniature Forums .
Visit the CDHM Doll Galleries to see Debbie's creations.