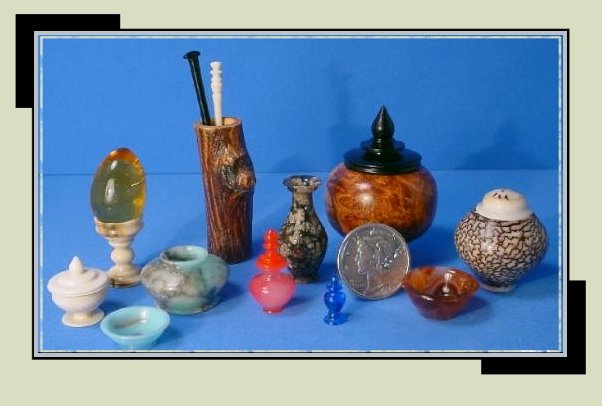 There are few creations in the dollhouse world that cause as many questions as a turning.

So what is it?

A shortening of the word "woodturning," a "turning" is the result of a piece of wood - or acrylic, nut, ivory or other like material - being placed on a lathe and scored with sharp instruments to create a new shape.

The exact beginnings of the skill are lost in history. Despite the ancient Sumerian's intricate skills in working precious metals and stone carving, no wooden examples of turnings exist among their artifacts. But as the inventors of the wheel and numerous other historical "firsts," it isn't an unreasonable assumption that artists of ancient Sumer were also responsible for the creation of the lathe.

Historic proof of turning, however, doesn't come until the discovery of King Tut's tomb. His legendary funerary goods included a turned joint, and tomb hieroglyphs depicted workers at an unusual vertical type of lathe. 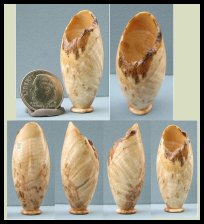 and a foot to a treadle mechanism granting much greater control. From there, the treadle operation graduated to water power, then steam and finally, modern electricity. The jerky push-pull bow lathe is still in use in the Middle East: a bowstring is wrapped once or twice around the wood to be turned, then on either the push or pull of the bow the wood turns toward the turner and the cutting tool applied. From this crude start-stop approach to today's smooth electronic operation, the lathe artist's imagination has been unleashed. CDHM Gallery Artist Mike Juza fell in love with the lathe during a high school shop class.

"When I was ready to graduate, I didn't really know what to do with my life, but I'll never forget the words of my shop teacher: 'Mike, do yourself a favor and buy a lathe, because it will always be something you can fall back on. . . and you make things on it that I only dream about!'" said Juza.

There are two types of turning: spindle and faceplate. Spindle, as the term implies, covers the turning of spindles, pens, furniture legs and the like where the wood grain runs parallel to the lathe bed. Bowls, platters and other vessels are created by faceplate turning.

Cutting with the grain creates smooth, wondrous forms in the hands of a master turner. Cutting in the wrong direction causes gouging and roughness, decidedly non-wondrous. 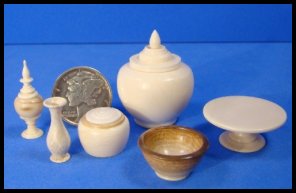 "The hardest thing I ever made was most likely the thing I made right after getting hit in the face with the first thing! Don't get me wrong, I've had a lot of things blow up on me but I persist until I accomplish it. It is really me that makes it hard until I learn to do it correctly - then again I could be wrong as I've only being doing it 30 years and I still screw up!!" said turner Bill Helmer.

Tracing the accomplishments of turners through history, the Saxons are documented as being prolific turners, in turn surpassed by Roman skills. The art reached a pinnacle in the Middle Ages in England with a veritable explosion of lathe work. After all, the castle had to be outfitted, and to keep up with the nobility the lesser classes wanted turned items of their own. Furniture, as well as architectural details, came tumbling out of the turner's shop, frequently combined with the skills of master woodcarver's for truly unique works of wooden art.

Thousands of wooden cups and platters were required for the coronation banquet of Richard the Lion Heart and a requisition remains from a country manor requiring 2,350 turned platters and bowls to re-supply its kitchens.

By 1300 BCE the London Company of Turners was established. But a mere 200 years later, when inventor Leonardo da Vinci applied his ingenuity to creating a treadle lathe with a crank mechanism, demand for so many thousands of turned items began to decline. Items of clay, glass, pewter and other materials began to supplant turned wood. But it by no means slowed down the creative fire of the artists involved in the practice of turning.

Skill levels continued to grow from the platters and bowls of those early turned pieces to the extreme ornamentation of the Victorian era. Also during this time period the craft began being practiced by the nobility as a hobby. While noblewomen competed against one another to create the most elaborate needlework, no piece of ivory, ebony, precious or semi-precious material in between was safe from Gentlemen Turners. 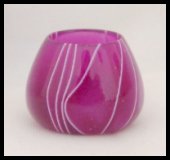 Today, Turning isn't restricted to the men. Just ask Fiona Bateman. Although she inherited her lathe from her father, a more recent 'gentleman turner,' she hasn't been hesitant to explore her own growing abilities.

"I've found turning very addictive. I have spent a lot of time on techniques and working with various materials. I am enjoying the learning experience although it is frustrating at times. I wish my Dad was still with us to give me advice and offer ideas but I have to either figure it out myself or ask some of the more experienced turners on CDHM. My Mum believes my Dad is guiding me, who knows? I do believe he would be very happy that I have followed in his footsteps," said Bateman. 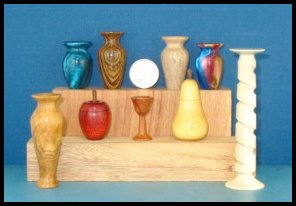 In America, a creative use of lathe work was to create a spindle, split it lengthwise and apply the two pieces to the fronts of furniture as ornamentation. In the miniature world, some turners don't stop at splitting spindles for an even more whimsical approach.

"I would say if whatever you make brings a smile to the buyer's face - I'm pleased! I do enjoy doing something different from whatever anyone else is making - I like to try unusual items. I've made a Kitty, a beehive and bee and Molly the woodturned doll," said turner Tom McMillan.

"Molly was definitely the hardest thing I've ever made, she was a combination of 9 different turnings. I was pleased with how she turned out. She took quite a lot of work---the arms were very tricky to attach," he added.

So what is a turning? From basic cups, bowls, platters, dolls to beehives, whatever lurks in the imagination of a turner.
Visit the CDHM Turners today!