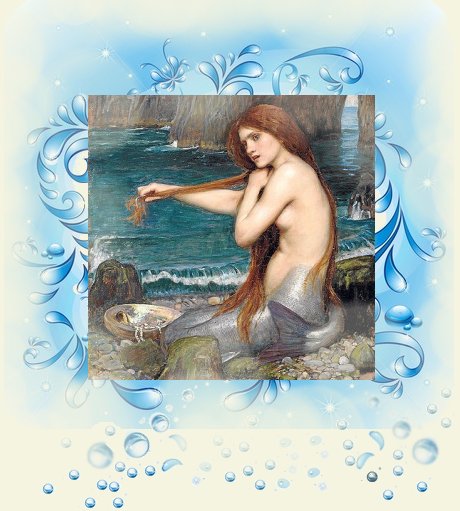 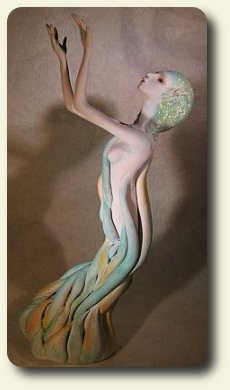 Water: source of life and death that holds a great beauty and terror all at once in eternal mystery.

Is it any wonder there have been multiple myths and legends in every culture regarding what might live within its sometimes crystal clear, sometimes murky depths?

No small wonder the Greek Pliny the Elder's writing of the beautiful 50 Nereids as "women with rough, scaly bodies like fish" caught imaginations near and far down through the ages. Particularly the often superstitious and vivid imagination of ancient sailors.

Nereids, sometimes referred to as water nymphs, were the patrons of sailors and fishermen, but they were not the first mermaids. That honor belongs to the masculine Oannes of Mesopotamia, who had the head and upper body of a man over a fish tail.

Surprisingly both great explorers Christopher Columbus and Henry Hudson documented seeing mermaids over the course of their voyages. Columbus wrote of spying three mermaids at play in the waters surrounding his ship, claiming they "were not as beautiful as they are painted." 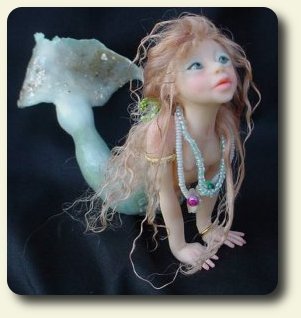 Hudson recorded two crewmen sighting a mermaid, who "had the tail of a porpoise and was speckled like a mackerel" and had a woman's breasts and long black hair.

Long hair - which they have frequently been spotted combing - and voices sweet enough to make a sailor drown himself are universally agreed traits of mermaids. Contrary to Columbus, they are also written of as being great beauties.

"As a child I was totally fascinated with the underwater world. I wanted to become a mermaid so desperately that I am still surprised I didn't," said Zaryana Bezuhlyy.

"Of course my first inspiration came from H. C. Anderson's the Little Mermaid. I read it over and over again, imagining every little detail so vividly that I felt myself a part of that finny world."

Anderson's story ended far more tragically than the popular movie "Splash," where Madison the mermaid ended up getting the guy and a happily ever after, or Disney's Ariel and her Prince. 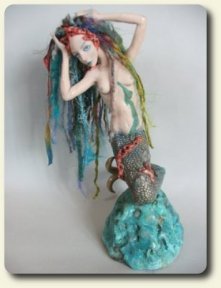 Whether tragic or happily ever after, many sources can inspire the creation of the perfect mermaid for an artist.

"I love mermaids, but the way they really are in the legends: a bit wicked, very sly and drowning the sailors. I decided to sculpt one because a lot of my fans - unbelievable, I got fans!! - asked me why I never sculpted a mermaid before," said Nefer Kane, creator of the Tribal Bellydance-inspired Seeweed's Mermaid.

"My special inspiration for creating mermaids is the wonderful fairy tales. There are so many books with lots of different looks for the water spirits and most of all the beautiful ones that Patricia Rose creates. I've purchased a couple of her instructional DVDs and also joined her guild," said Diana Noch.

"I sculpt Mermaids much less than faeries. When I do sculpt one, it's usually because something inspired me. In the instance of my Caribbean Mermaid, I was influenced by the Caribbean Mermaid in 'Arthur Spiderwicks Field Guide'," said Judy Raley. 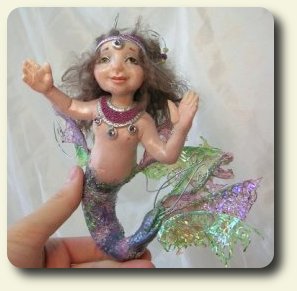 The CDHM artists agree it's the tail that makes sculpting mermaids so much fun.

"The tail can be very exciting because you can use many things such as Cicada wings and Translucent Liquid Sculpey or TLS, some glitter, no-hole tiny beads, powders, just to fancy them up. You can use Translucent polymer clay and shape them real fancy and adorn them too. There are more ways but I like those the best," said Diana.

"I thought about the whales," said Nefer.

"Or having their skin covered in tiny shells. I also thought of the way animals always camouflage in nature to survive so seaweed came obviously in my mind, the coral and sea shells too. The anchor as a tail is a wink to the legends of mermaids drowning the poor sailors who listen to their mesmerizing sing." 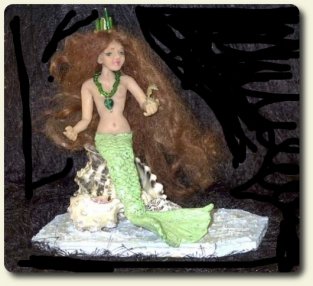 "I wanted Caribbean Mermaid to be pretty like I imagined a mermaid would be, but also exotic, so I decided to do something different with the shape and color of her tail by making it like an eel instead of the traditional fin-shape. I also used glow in the dark clay for part of it to mimic some deep sea creatures that actually glow," said Judy.

"There are a lot of things that can help to make stunning looking tail. For instance I like using clear microbeads over acrylic paint with gloss cover," said Zaryana.

In addition to the tail, there are other items of interest for these unique creatures that deserve special attention.

"I like long lamb's wool locks and would love to figure out how to give her a wet look," said Diana.

"Webbed hands seemed to me easier for swimming, and of course the gills. Since I was a kid I've wondered how mermaids could breathe under the sea; so gills on her waist was the best way to answer this question in my opinion. And as I wear dreadlocks myself, I figured how heavy they can be when they're wet, and that's what inspired me for Seeweed's pose, kneeling down, trying to get the excess of water off her seaweed hair," said Nefer. 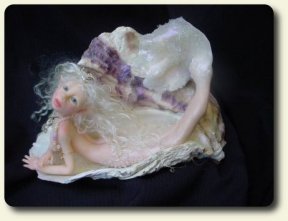 Sculpting the mermaid is different from sculpting a regular art doll, not so much because of the obvious reason of a tail instead of legs, but the sculpt must include some kind of setting or base to rest upon.

"The seashell I used for Caribbean Mermaid just seemed perfect for her. Pretty, but not so fancy as to detract from her. As you can probably guess, of all the mermaids I created, I think she is my all time favorite," said Judy.

"I like making a set with a water effect on the wood base then adding shells and even manmade fish. Making a thrown out setting of seashells is another way to pose them. And a starfish is a really interesting object to pose a mermaid," explained Diana.

"I really like simple bases and surroundings. Also, it depends on what kind of mermaid I am doing. If it is realistic, the base will be realistic as well, like stone or Manzanita burl with minimum decorations on it. Some artworks meant to be more symbolic like, for example, my Sea Goddess. She symbolizes the inner child rising from the deep waters of the subconscious. Her base is a simple rectangle with painted swirls and seaweed. I believe the base and surrounding should support the artwork rather than compete with it," said Zaryana. 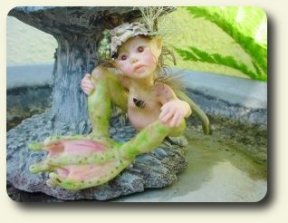 And because mermaids are so much fun, all the artists agree there will be more finny creations in their futures.

"I am always inspired by the mysteriousness and duality of Nature. Just looking at the dark waters or the beauty of coral reefs gives me so many ideas. A simple question like who might live under the lily pad brings up a story full of wonderful characters in my mind. And I have countless questions and numerous characters. I only hope that I will have enough of a life time to be able to create all of them!" added Zaryana.

"I recently created a mermaid after almost two years. I will create more mer-creatures, I'm just not sure when. I like the unusual, though, so I'm toying with the idea of a Jellyfish Maiden," said Judy.

"Oh absolutely I will create more! I already made Captain Nemo's wife steampunk head and I'd love to sculpt a full body steampunk doll of her. I got some octomaids and "Krakenmaid" projects I'd like to sculpt and I'm working on a seahorsemaid. I like strange and a little bit dark creatures. Being a sculptor allows you to create anything you can imagine and it's a part of my work I prefer. I live at the seaside so it inspires me a lot," said Nefer.

Take a tour through the CDHM Doll Galleries and see how many Mermaids you can find!